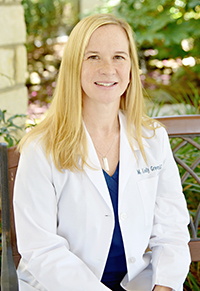 Dr. Green studied chemistry and French during her undergraduate years at Trinity University in San Antonio. During her time at TU, she was a member and co-captain of the collegiate swim team. Dr. Green was active in the TU Chemistry Club, and created a volunteer-based children's chemistry demonstration program at the San Antonio Children's Museum.

Immediately following graduation from college, Dr. Green served two years in the United States Peace Corps in West Africa, where she taught physics and chemistry in French. She initiated a well construction project and taught education programs for rural women. Upon returning from Africa, she worked for two years as a high school chemistry teacher in Georgetown, Texas. Dr. Green went to medical school at the University of Texas Health Science Center at San Antonio, and completed a transitional internship in Austin at Brackenridge Hospital. She then returned to San Antonio for residency in ophthalmology. As a senior resident, Dr. Green was chosen by the faculty to be a recipient of the Resident of the Year Award. She currently serves as a Clinical Instructor at the University of Texas Health Science Center in the faculty of the Department of Ophthalmology. Dr. Green enjoys teaching medical students and ophthalmology residents.

Dr. Green joined the Kirby Eye Center in Marble Falls, Texas in 2009. She enjoys examining patients in the office and treating such ocular conditions as dry eyes, glaucoma, and cataracts. In addition, she enjoys performing micro-incision cataract surgery, LASER surgery for glaucoma and other conditions, and eyelid surgery.

Dr. Green is a member of the following professional organizations: Austin Ophthalmology Society, Burnet Lampasas County Medical Society, Texas Medical Association, Texas Ophthalmological Association, American Society of Cataract and Refractive Surgery, and the American Academy of Ophthalmology. She has served many times as an officer of the County Medical Society and initiated projects to serve the local community, including a scholarship for high school students. She is Board Certified by the American Board of Ophthalmology and proudly serves as an examiner for the Board.

When not at work, Dr. Green loves running, swimming, and spending time with her family. Dr. Green and her family love living in Marble Falls and enjoying the beautiful Texas Hill Country. 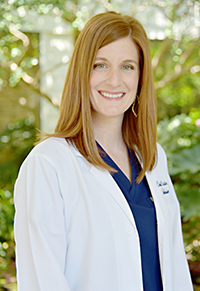 P. Christi Carter MD is a board-certified comprehensive ophthalmologist with an emphasis on surgery of cataracts, eyelids, and pterygia, as well as glaucoma laser procedures. She performs diagnosis and treatment of cataracts, glaucoma, macular degeneration, diabetic eye disease, dry eyes, ocular infection and inflammation, and many other eye conditions.

Dr. Carter attended medical school at The University of Texas Medical School at Houston, where she received additional academic scholarships and honors and discovered her passion for ophthalmology. She completed her internship at The Methodist Hospital in Houston before moving to lowa to complete her residency training at University of Iowa Hospitals and Clinics, one of the top ophthalmology training programs in the country. Throughout her training she participated in research, producing multiple publications and giving numerous academic presentations.

Dr. Carter has been an active participant in her community, having advocated politically on both the state and federal level for her patients, participating in medical mission trips to Ethiopia and Brazil, and formerly serving as a club volleyball coach. When not at work, she enjoys spending time with her husband and two young sons, scuba-diving, wakeboarding, hiking, and studying the Bible. She and her family love living in Marble Falls. 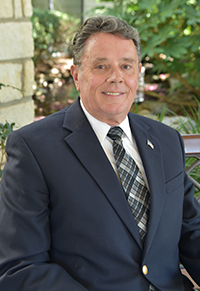 Dr. Felton is a retired Lieutenant Colonel of the United States Army. He served 20 years as an Army Optometrist at Fort Jackson South Carolina, 130 Station Hospital, Heidelberg, Germany, Fitzsimons Army Medical Center, Aurora, Colorado, and Darnall Army Medical Center, Fort hood, Texas. He served as Chief of Optometry in all locations except for Fitzsimons Army Medical Center where he was the Executive Officer and Chief Instructor of the Army’s Medical Equipment and Optical School. He was awarded the Legion of Merit, 2 Meritorious Service Medals, 3 Army Commendation Medals, 4 Army Achievement Medals, 2 Overseas Medals, 2 Good Conduct Medal, the Parachutist Badge and the Expert Field Medical Badge. He is also in The Order of Military Medical Merit and was honored by The Texas National Guard with the “Star of Texas” for his contributions during their first deployment overseas since WWII. Read More

Dr. Felton graduated from the Illinois College of Optometry in Chicago after receiving his under graduate degree from Buena Vista University. He also has a Master of Science from Central Texas University. He is a Therapeutic Optometrist as well as an Optometrist Glaucoma Specialist. He is a Fellow in the American Academy of Optometry.

Dr. Felton’s hobbies are canoeing/kayaking, hunting and fishing and playing any kind of sports with his 4 grandsons.

Dr. Felton is widowed after 35 years of marriage. Hide More